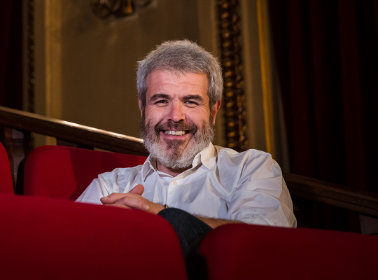 Lorenzo Caprile (Madrid, 1967) obtained his degree in Language and Literature from the University of Florence and becomes a fashion designer at the Fashion Institute of Technology of New York and International Fashion Polytechnic in Florence.

Gold Medal of Merit in the Fine Arts 2018, his career started in 1986 for important fashion brands, both Italian and Spanish, until he opens his own atelier in 1993 in the heart of Madrid.

Expert in bespoke gala dresses, his creations have been paraded at red carpets worldwide, and his unique and handcrafted garments have filled numberless covers of the best-known specialized media. Since 2005 his name runs parallel to exclusive creations for plays, films, dance, ballet, and opera, being a renowned stage costume designer for the National Company of Classical Theater.

Author of Vamos de boda and De qué hablamos cuando hablamos de Estilo, he regularly participates in conferences and round tables organized by the most prestigious design institutions and schools. Currently he also collaborates in El Comanche, the Onda Cero radio program conducted by Julia Otero.

Caprile has received numerous awards and recognitions to the excellence of his work as a fashion and costume designer.