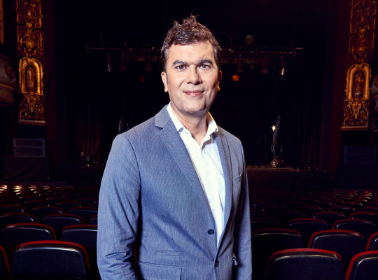 Luis Perdiguero (Alicante, 1972) graduated in Audiovisual Communication at the Universidad Complutense in Madrid, and has been working in performing acts for the last 25 years, combining this profession with stage direction, lighting and stage design.

Director of DiiVANT, (center for the Development and Research of New Technologies and Avant-garde Arts), responsible of the Area of New Technologies and Avant-garde Theater at the RETO-RED project, director of the European Institute of Design (IED) Master in Stage Lighting, full professor of Lighting, New Technologies, and Sound Space at the School of Dramatic Art of Castilla and Leon (ESASCYL), and professor of Lighting at the IED Master in Master of Scenography and Exhibition Spaces. From 2006 to 2008 Perdiguero was technical director of the National Drama Center under the direction of Gerardo Vera, former responsible for lighting design at Mira de Pozuelo Theater, and technical director of companies such as Nuevo Ballet Español, Corella Ballet Castilla y León, or Teatro de la Danza. He has received numerous recognitions, such as the ADE Award bestowed by the Stage Directors Association by the Association of Directors of Scene with the ADE Award for the best Lighting Design for the Transition show, finalist in the Musical Theater Awards for Hercules, and two more ADE Awards in 2013 and 2017.

As illuminator, international premieres such as Swan Lake at Detroit Opera House, Soleá y Pálpito at the New York City Center, the musical Adir at Paris Théâtre de la Ville, Sound Architecture at Moscow Ballet Theater, or the scenography and lighting of La Chana – Godess of Compas at London Sadler´s Wells. In Spain, Perdiguero has accomplished impressive lighting design works for musicals such as The Wizard of Oz, Tarzan, or Hercules, and the plays and dance lighting designs for the National Center for the Performing Arts (CDN), the National Company of Classical Ballet, the Lyceum, and the Zarzuela Theater.